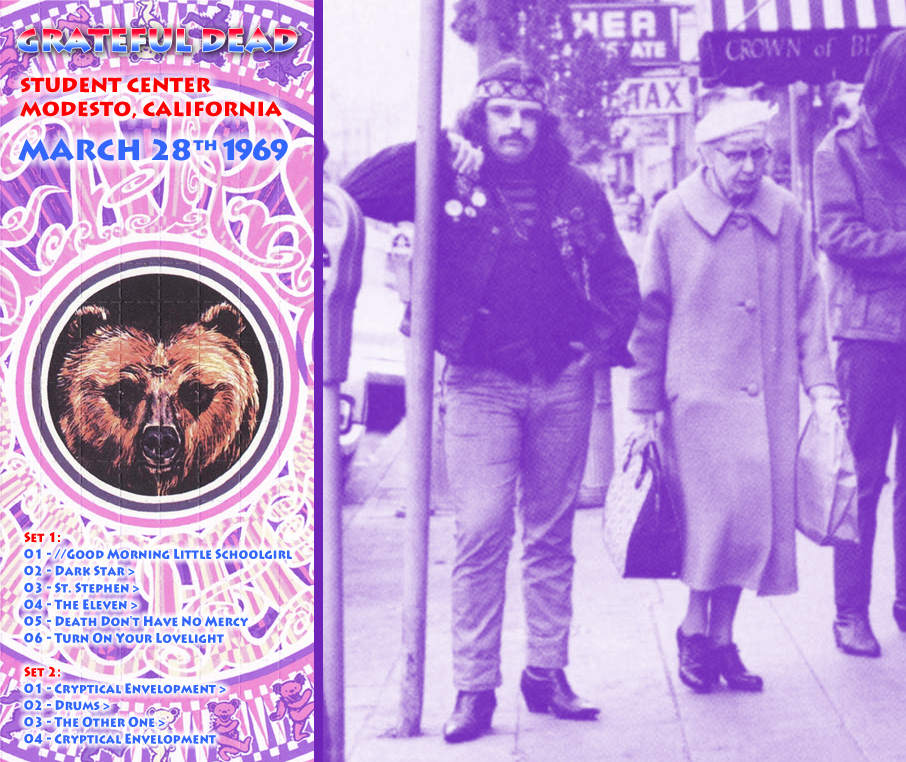 Reviewer: r0xcy - favoritefavoritefavoritefavoritefavorite - March 17, 2020
Subject: Just Be Bopping thru the Truelicks
Wow and Thank You for this pleasant treat while we ponder the universe. Exquisite sound and playing. It is njpg worthy of 5 stars. Enough said.
Reviewer: c-freedom - favoritefavoritefavoritefavoritefavorite - November 20, 2014
Subject: Modesto is not far from Turlock
Pretty cool that the Dead played out in farm country.
Great rockin Good Morning Little School.
Pigpen wanted to get to the 17 year old part pretty bad.
Nothing like tuning to the Dark Star riff.
This has some great sound.
Found this to be a very interesting part of the country. Tons of produce grown in the area very fertile soil yet the water comes in from the mountains in these aqueducts that run for hundreds of miles.
It snows like crazy in the Sierra Nevada but not so much in the Valley in fact the valley is very much like a desert without the mountain waters.
Not far from San Francisco by car but might as well be on another planet culturally for better or worse.
A lovely Dark Star!
They start on a little side riff before the 2nd verse of the Dark Star. Wow, Jerry is so laid back on the vocals.
And they search a little and it unfolds into St Stephen. Dark Star>Stephen! That never gets old.
Watch out for the Red Light camera's downtown.
I am not sure why Furthur decided to Calypso the ELEVEN... oh Well at least they played the tune.
Great Harmonies on the Eleven and a super jam!!!
Jerry let's loose on DEATH DON'T. This was the Morning DEW slot of this era.
Here is a little bit of a tangent as I listen to PIGPEN lead the boys thru LOVELIGHT.
What I love about PIGPEN is he could rap about taking somebody to bed and it could fly over the children's heads yet an adult knew exactly what he was saying. I watched the HBO-CONCERT FOR VETERANS and first hats off to all the artists who participated in the concert and of course to our vets and active duty personnel. The thing that struck me was M&M coming out and saying MotherF. this and MotherF. that. The guy has talent, no question. (8 mile was an intense movie)A time and a place for everything.
Jerry says, Gonna take a break and drink some liquid coke, then somebody tells him time is short so they stay up and go for Cryptical.
Somebody on stage says, You plow too much corn, you are going to get dirt in your shoes, and more cryptically, Light a match and the world will follow you home?
Basically this is the encore, pretty good use of 15 minutes if you ask me.
Jerry is playing like he is in Black Sabbath!!!
Excellent That's it for the Other One even outshines the earlier Dark Star
Note: would be better to make OTHER ONE a single track, 18 seconds of Drums is a buzzkill
What an impression this had to make at the local Junior College pretty far removed from Frisco but not so far removed from Vietnam.
"You know he had to die"
Go MODESTO NUTS.
Jerry: See that the lights have gone on
We will see you next time we are in town
or something like that
Unknown female at Microphone: "Let's give the Grateful Head a big hand of applause"
THANK YOU FOR THIS RECORDING.
Reviewer: njpg - favoritefavoritefavoritefavoritefavorite - March 29, 2014
Subject: -
Excellent.
Reviewer: kishnish - - March 3, 2012
Subject: wow
thank you
Reviewer: NaknDead - favoritefavoritefavoritefavoritefavorite - June 19, 2010
Subject: Clear a space, turn it up
What a pleasant surprise to visit again and find a new gem. A Modesto Student Center?…no wonder they opened with School Girl and turned up the love light. I am instantly grateful and dead, as I tune in…the sound is smooth and rich, Jerry’s guitar has an edge that sounds like political protest, and his attack is particularly sharp…joyously mind-opening in fact … they ring that bell, be here now… where was i? The show has that presence and flow of originality, like the Fillmore West shows, 2/27 - 3/2/69. By the sound of it, the contributors offer an excellent reproduction of Bear’s recording, complete with well handled azimuth tuning. Grateful, indeed!